Remember JAWS, that iconic 1975 film directed by Steven Spielberg starring Roy Scheider, Robert Shaw, Richard Dreyfuss, and Lorraine Gary. Oh, and one killer of a hungry shark terrorizing a small coastal township during the height of its summer season.

I watched this movie for my first time last summer. And even with the corny shark puppet the movie is still somehow totally scary. Its amazing to think that maybe this movie would be less scary with cgi? Or if it was more scary with cgi effects would the beaches be less crowded during the summer? Maybe more shark nets and shark checking at beaches would become more monitored. Let’s not find out! I think that sometimes the “old-time” movie effects may look obvious, but somehow the music, and the way the movie was shot makes it so much scarier. Movie makers had less “realistic” looks to rely on for making their movie credible, so sound design, and camera angles became more important.

Anyway, I invited my girlfriend to watch this scarey thriller with me. Neither of us were born when the film was originally released. When I told my folks we were going to watch it for the first time, both of them had vivid memories, which they related to me, of the first time they saw it. My girlfriend is game for just about anything, but Jaws really got to her in the fright and gore department. She spent a lot of time, whenever the “jaws” soundtrack would begin with her head pressed against my shoulder and hands over her ears. She was wearing a new pair of double sided earrings that she had recently purchased at an online site called SterlingForever. I thinks it’s her favorite jewelry store since they have great jewelry designs and are selling sterling silver rings and her new earrings at really moderate prices. Anyway she had on these new front / back earrings that had larger balls of many rows of multi faceted colored stones and a smaller ball in the back packed with just white diamond like stones. The reason I bring up the earrings is that she “lost” one of the studs while we were watching the movie.

She noticed one was missing, when I turned on the lights at the end of the movie. We then spent the next 45 minutes looking for it on the sofa, under the sofa, in the cushions, on the floor, and in every room she had been in that evening. She became more distraught about losing that new double sided earring than she was when watching Jaws. I later found the earring in my cat’s bed. It must have dropped on the floor, Jasper found it, and ended up treating it like his cat toys, hiding it in his cat bed. Unlike my parents’ recollection of watching Jaws, my most vivid memories of that night were of my girlfriend losing her earring! 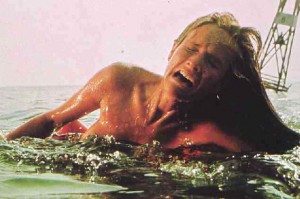 Anyone who has seen JAWS – and really, who hasn’t? – knows that the teenaged girl / victim in the opening scenes (shown in pic on left) wasn’t having a good day. I mean, she’s drunk, and her boyfriend is even drunker. He’s so drunk, he’s passed out on the beach, so you know she’s not gettin’ any. So what’s a horny girl to do? I know – take a nice cool down in the water. I’ll just wade on over here in the deeper section of the ocean and…wait…what’s that tug?…Ow! Why does it sting? OMG, is that blood…AAAGH, the pain, AAAAAAAAGH!!!!!! Yeah, she wasn’t having a good day. Nothing like getting killed by a couple of shark bites to the leg and upper torso.

UNLESS they’re like a MILLION bites all over your ENTIRE BODY AND FACE by a school of BLOODTHIRSTY, FRENZIED PIRANHAS! Check out this pic below from the upcoming PIRANHA 3D (remake of 1978’s PIRANHA), directed by Alexandre Aja: 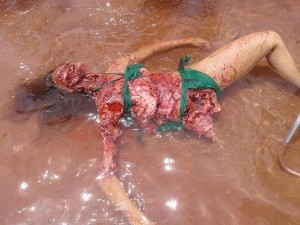 That my friend, is a REALLY bad day. Or as they say in this neck of the woods, “At least it’s the dry heat”.